Good Shot Placement is All You Need?

Common Misconception - "If you just place your shot correctly, you will kill the animal every time and whatever arrow and broadhead you put in that spot is secondary"

My own experience, as well as that of other hunters I know, has shown me this is not always the case. I’ve had perfectly placed shots that failed me because a broadhead came apart or didn’t penetrate well. Just because an arrow hits the spot you want, doesn’t mean it will kill the animal every time. Consistent kills takes more than just good shot placement; it takes an arrow and broadhead that's up to the task.

No doubt, accurate shot placement should still be your first line of defense in fast kills and I in no way want to minimize this fact. That said, simply being a good shot does not guarantee success. I know of multiple world renowned archers (who I’ll leave unnamed), that possess skill and means far beyond that of your average bowhunter. Even they have stories of doing everything in their power to place a shot well, and not recovering an animal because they had no back up plan.

I speak from experience when I say it sucks to hunt hard all season long for one particular 300 plus inch six-point elk and finally get that perfect broadside shot, only to have my arrow get a mere six inches of penetration! The shot looked good. Did my arrow hang up on a rib, or did it clip his shoulder? The sad truth is I’ll never know.

Or how about the time I drilled a perfect quartering away shot on a big ol’ Roosevelt elk. The problem was those big ol’ Roosevelt ribs didn’t let my 450 grain arrow reach the far lung. As you can see, I learned the value of Plan B the hard way. My good shooting alone was not enough to close the deal in either circumstance.

After every season I hear story after story from avid, well-meaning bowhunters who like me did everything in their power to make a good shots, yet still didn’t recover the animal. Whether they miss under the adrenaline of the moment, a bone comes between them and success, or a broadhead dulled on them, the result is the same, crushing disappointment and a lost animal.

After all the research that went into writing this book, as well as my own personal experience, I've found that poor penetration, and/or broadheads that dull upon entry are two major reason animals aren’t recovered by bowhunters. The moral of the story is, make sure your arrow is accurate enough to kill by lung collapse (plan A) and strong and sharp enough to kill by hemorrhage (plan B), even when you hit bone. 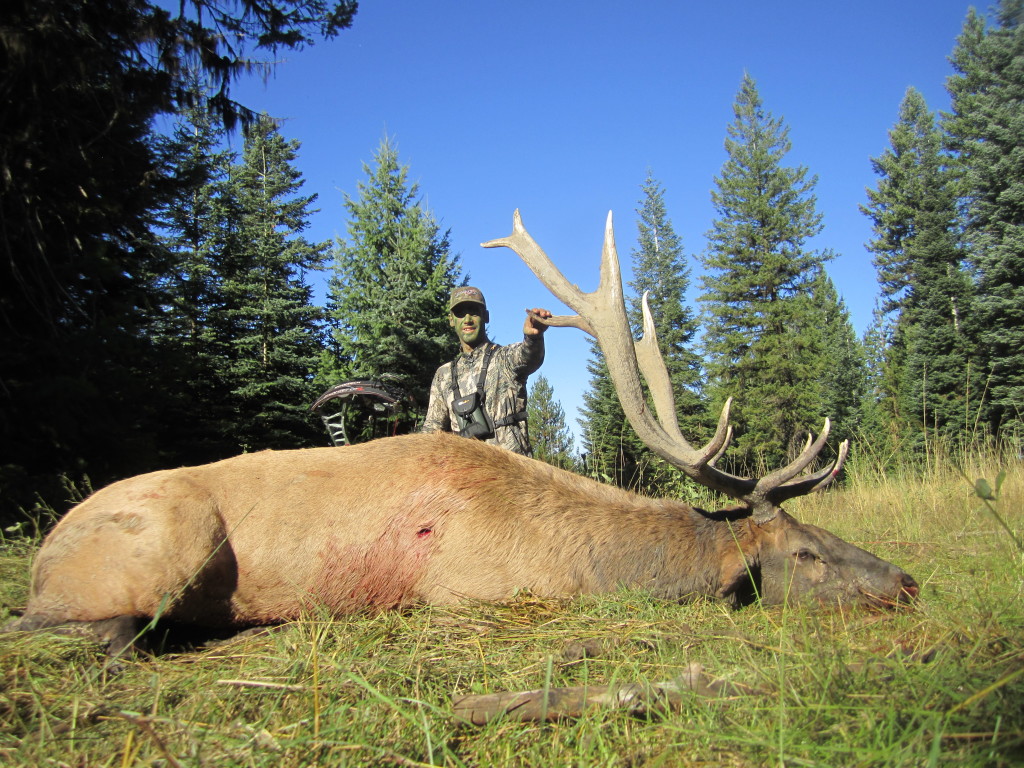 I sure was thankful for having a Plan B in place when I shot this bull. My shot was high and ended up breaking through the front shoulder and spine which stopped the elk in his tracks. With a lesser arrow and broadhead system it’s doubtful I would have recovered him. (See the story at the end of chapter 8 of the book "Can't Lose" by Jeremy Johnson)

For more information about how to make sure your arrow and broadhead is up to the task, get your copy of the book “Can’t Lose Bowhunting” by Jeremy Johnson